In recent years, with the implementation of the expansion plan, Rubicon, STC, Monocrystal three manufacturers occupy about 40% of the global sapphire crystal rods, of which Rubicon has a global leading position. This phenomenon indicates that the global sapphire crystal rod production capacity distribution tends to be average, while the latecomers began to expand capacity to catch up with the three giants, South Korea SapphireTechnologyCompany (STC), Russia Monocrystal and other market share are rapidly increasing.

At the same time, with the expansion of Taiwanese business Yuefeng, the production capacity has jumped to the fifth place in the world, surpassing Japan's Kyocera and Namiki Precision Jewel. 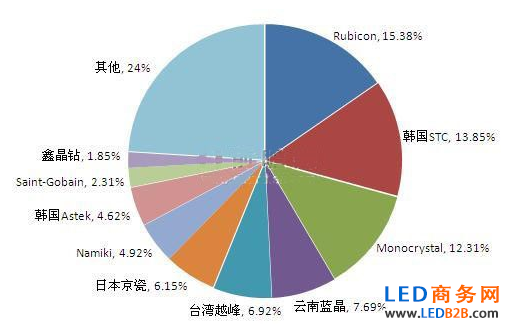 The sapphire screen is not only wear-resistant, but also makes the touch screen more sensitive, thermal and translucent, and ensures a clear picture. It is a new choice for smartphone screens. Sapphire as a mobile phone screen can be said to be an epoch-making innovation, and later is a big trend.

Participants in the sapphire industry want to slap the apple tree. If the Apple iPhone 6 uses a sapphire screen, in general, Apple's new products use new materials, the market will be short-term speculation on this material, and in the long run, there will be some attention to the related intelligent hardware. For example, whether the wearable device will use this material in the future, the sapphire market may have an explosive period.