In order to meet the needs of smart cards and trusted computing applications, a dedicated SoC chip was designed and implemented. The chip consists of a microprocessor, program and data memory and management module, security logic module, cryptographic service module, auxiliary function module, I/O interface, which can provide confidentiality, integrity and identity authentication for various security applications. A cryptographic service, as well as applications such as data storage, access control, and secure computing.

The design of the security control architecture of the dedicated SoC chip should first analyze the application environment of the chip, and obtain the threat model and deployment model of the chip, namely the potential attacker and possible attack mode of the chip, as well as the production, transportation, development and use of the chip. The risk problem of the link; secondly, according to the chip security requirements and functional specifications, through the software and hardware collaborative design, set the relevant hardware logic, status register and parameter storage area, and implement the software control process of the relevant security policy; The system performs safety analysis, simulation verification and FPGA testing.

Level 0 assets: integrity and credibility of the O layer code, confidentiality, integrity and credibility of the layer 0 data (LEVEL0), and the correct function of each module of the chip. Level 0 assets are the security foundation of the chip system, and failure to protect any of them will result in the entire chip system refusing to provide any services.

After the chip is powered on, it can obtain different security rights by executing a series of commands, and thus is in a certain security state.

ST1: Factory default state. Under the premise of trusting the manufacturer, the chip can be trusted at the factory initial state. The initial state is the trusted basis of the chip.

ST2: Chip enable status. When the power is first applied, the status of the chip is after the power-on self-test and transmission security certification. The chip is verifying that each functional module is correct and that. After the layer code and data integrity check are passed, the transmission process security authentication command is received, and the shared secret of the developer and the manufacturer is utilized, and the chip is authenticated within the allowed number of authentication times. 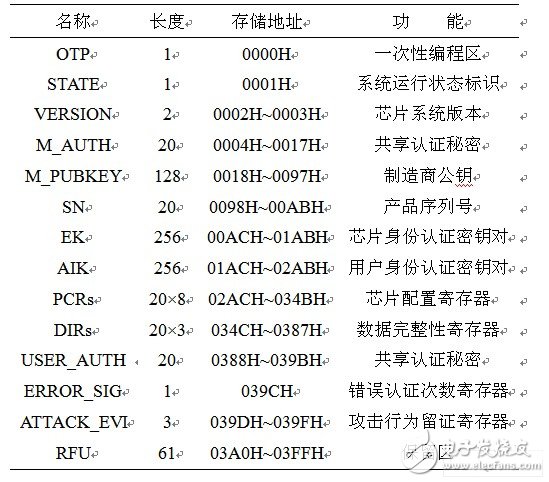 In Table 1, the OTP (One TIme Programmer) area is a one-time programming area for the permission identification and status retention of the chip once. STATE is the system status identifier, which is used to identify the current permission status information of the chip. The correspondence between the roles and bits of each bit in OTP and STATE is shown in Table 2. Each of them is active high. 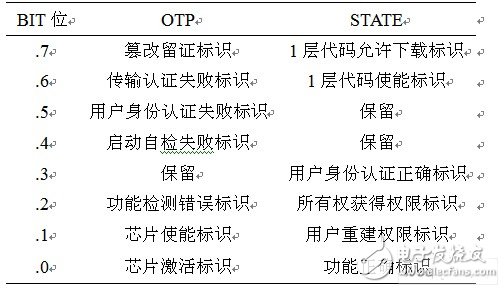 M_AUTH is the shared secret between the manufacturer and the developer, M_PUBKEY is the manufacturer's public key, and SN is the product serial number, which are used together for the chip's transmission process security certification. EK (Endors- ement Key) is the identity authentication key pair of the chip system. In the actual application process, the chip signs the data by calling the EK private key to indicate its legal identity. AIK (Attes-taTIon IdenTIty Key) is a developer identity key pair. It is generated by the on-chip random number and the RSA algorithm IP core during user identity creation for user identity authentication. PCR (Pla-tform. ConfiguraTIon Register) is the platform configuration integrity registration area. In order to meet the hardware scale limitation of the chip system during the FPGA test of the dedicated SoC chip, eight PCRs are temporarily configured for the chip system, and each PCR register is 20 bytes. Except for PCR6 and PCR7, the expressions of the remaining PCR registers are as follows.

DIR (Data Integrity Register) is the data integrity register of the chip system, which registers the internal data and code integrity information of the chip. In the specific design, three DIRs are configured for the chip system to store three levels of data and code integrity. Sex, the expression of the information stored in each DIR register is as follows.