The emergence of a large number of light-emitting diodes (LEDs) as solid-state light sources has made incandescent lamps increasingly backward. In the past few years, LED technology has made great progress, and advances in heat dissipation, packaging, and process technology have led to higher brightness, higher efficiency, longer life, and lower cost.

However, there is still room for further improvement in terms of energy conversion efficiency, thermal management and production costs. For example, LED efficiency has been greatly improved. Many improvements in LEDs have resulted in better light generation within the chip and a better way to obtain light sources from the chip and its packaging. Similarly, the price of the 20mA white LED has been greatly reduced. When the LED was first introduced, the purchase price was $1. At present, it is possible to buy a 20 mA white LED at a purchase price of less than 30 cents.

Of course, all of these advancements have not only contributed to the use of LEDs as illumination sources in different applications, but have also spurred demand for LED driver ICs. To understand the obstacles to designing and manufacturing LED driver ICs, it is necessary to understand what conditions are required for white LEDs to emit light. The white LED must be driven with a constant current source so that the white spot does not change (ie the brightness must be the same). In addition, since the white LED is a diode, its internal forward voltage drop (Vf) must be overcome. Vf varies with the white LED current value and also with temperature. In general, the Vf of a 20 mA white LED varies from 2.5 V to 3.9 V over the entire operating temperature range. Most applications use multiple white LEDs, and it is also possible to configure these LEDs in parallel, series or series-parallel hybrids. This means that a white LED driver IC must be able to supply enough current and voltage for multiple LEDs in a particular configuration, and the voltage conversion topology used in this IC must meet both the input voltage range and the output voltage and current requirements.

Common applications for LEDs include display and indication of automotive and aircraft dashboards, traffic lights, cell phones, flat panel display backlights, miner lights, buildings and large stadium lighting, and the biggest driver of LED market growth in the coming and future years. Backlighting requirements from flat panel displays. These displays use LCD screens for televisions, navigation systems, portable media players, digital billboards and computer monitors. However, the adoption of LEDs faces the technical challenge of thermal management. Although LEDs do not radiate as much heat as other light sources, depending on the output power, some LEDs may require a suitable heat sink so that the light output is not reduced and the lifetime is not shortened. For example, a high brightness LED with a light output of 25 lm typically consumes more than 1 W of power. This means that the white LED driver IC must be converted with high efficiency so that it does not become a major cause of thermal problems. In addition, there are space constraints in many cases, and the LED driver solution must have a small footprint and a small form factor.

In the case of mobile phones, most mobile phones today have built-in digital cameras that can take high-resolution photos and videos. The increase in camera performance has also led to the need for high-power white light sources that need to be used indoors or in dimly lit environments. White LEDs have become the primary source of light for camera phones. Because white LEDs have many of the features that modern mobile phone designers want: small size, high light output, and the ability to provide "flash" and continuous illumination of "video" objects. High output power LEDs have been developed specifically for integrated camera lighting.

Although it is easy to generate visible light with high-power LEDs, it is very difficult to form high-performance power and current control solutions without modifying existing designs. Linear Technology's LTC3454 is a new product designed to improve power conversion efficiency and accuracy in high current camera lighting applications and optimize LED current control. 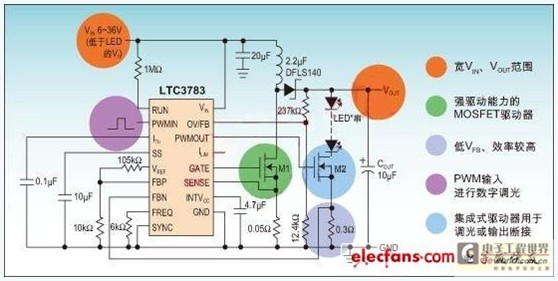 Almost all battery-powered portable products use color active matrix LCDs to display the information and data users need. However, manufacturers face the challenge of ensuring that users can see information from such displays in any environment. In order to achieve this goal, manufacturers must provide a color LCD with appropriate backlighting intensity. This type of backlighting is typically provided by white LEDs. Thus, there is a need for compact, high efficiency and low noise LED power supply solutions.

The LTC3208 is an inductorless, high current, software configurable multi-display LED controller that can drive up to 17 LEDs. The device contains a 1A high efficiency, low noise charge pump that powers the primary, secondary, RGB, camera and auxiliary LED displays. With up to 95% efficiency and an I2C serial interface, the LTC3208 offers user benefits with longer battery life and a simple 2-wire microcontroller interface. The LT3486 is a dual, 1.3A white LED boost converter with a wide dimming range designed to drive up to 16 LEDs at a constant current with a single-cell Li-Ion battery (8 converters per converter) Designed for LED).

LCD TFT backlighting for high-end TVs, industrial lighting applications, car navigation displays and projectors may use high-brightness (HB) and ultra-bright LEDs. Common applications for this type of LED are instrument panel backlighting, interior lighting, and many car and truck brake lights. Luxury car manufacturers are increasingly using the latest solid-state LED lighting technology to enhance the aesthetics of future models, using these lighter, smaller and more durable devices for internal and external lighting. It is clear that LEDs have many advantages over incandescent lighting, such as LEDs that are expected to reduce long-term costs and have a longer life.

However, driving LEDs at high currents requires the DC/DC converter to accurately regulate the current to ensure consistent light intensity and color consistency and to protect the LEDs. In addition, there is a major challenge in powering one or several LED strings with battery voltages that may be lower, equal to or higher than the load voltage. Another issue of concern is the dimming of these LEDs with high dimming ratio, while maintaining the color characteristics of these LEDs at low brightness and high brightness. Finally, a critical requirement is that DC/DC drivers operate at high efficiency, especially when driving HB LEDs, since all power that is not converted to light is converted to heat.

When driving LEDs with automotive batteries, DC/DC converters are required to accurately regulate the LED current to ensure consistent light intensity and color consistency and to protect the LEDs. In addition, depending on the purpose of the LED, the DC/DC regulator should also be optimized for specific power requirements. The major challenge here is also to power one or several LED strings with battery voltages that may be lower, equal to or higher than the load voltage. A problem to be concerned is also to dim the LEDs with high dimming efficiency, while maintaining the color characteristics of these LEDs at low brightness and high brightness. It is also a critical requirement for DC/DC drivers to operate at high efficiency, especially when driving HB LEDs. The reason is the same as above, and the power that is not converted into light is converted into heat and wasted.

The LTC3783 is a current mode, multi-topology converter with constant current PWM dimming capability for driving high power LED strings and LED groups. The device uses proprietary technology for extremely fast PWM load switching speeds and no transient undervoltage or overvoltage issues. The LTC3783 digitally achieves a 3,000:1 dimming ratio (at 100Hz) because True Color PWM dimming ensures color consistency between white and RGB LEDs. The LTC3783 also achieves an additional dimming ratio of 100:1 when using analog control. This dimming capability is important because the human eye is extremely sensitive to small changes in ambient light. This general purpose controller can be used as a boost, buck, buck-boost, SEPIC or flyback converter, and as a constant current / constant voltage regulator. The RSENSE-free operating mode utilizes the on-resistance of the MOSFET, eliminating the need for a current-sense resistor and improving efficiency. A typical application of the LTC3873 is shown below.

The LT3475 is a dual 36V, 2MHz step-down DC/DC converter used as a constant current LED driver that delivers up to 1.5A of LED current per channel. The internal sense resistor and dimming control make this device ideal for driving high current LEDs. The LT3475 maintains high output current accuracy over a wide current range of 50mA to 1.5A, while the unique True Color PWM circuit achieves a 3,000:1 dimming range.

With a wide input voltage range of 4V to 36V, the LT3475 can regulate a wide range of power supplies from 4-cell alkaline/NiCd/NiMH batteries and 5V logic rails to unregulated wall transformers and automotive power systems. Its switching frequency can be set from 200kHz to 2MHz, allowing the use of tiny inductors and ceramic capacitors while avoiding critical bands such as the AM broadcast band. The LT3475 is a very compact solution for driving two or four high current LEDs.