Nowadays, large-screen color TVs, especially popular large-screen color TVs. Manufacturers want to simplify the circuit. To reduce costs, most of its remote standby circuits are implemented by a standby triode to turn off and turn on several sets of low voltages (each chip voltage). In this way, although the TV sound and light are completely absent during standby, the entire switching power supply is working normally, so its power consumption is relatively large. I used the 5A meter to test. A 29-inch large-screen color TV with standby power consumption of twenty or thirty watts. In addition, since the CPU+5V power supply is also provided by the switching power supply, the isolation of the entire switching power supply is poor, and a lightning strike is encountered during standby. The CPU is extremely fragile, so it is necessary to improve the standby circuit.
Before the improvement, briefly analyze the form of the standby circuit. The standby form of large-screen color TVs generally has the following three types:
(1) Use the standby triode to control the operation and cut-off of the photocoupler to achieve standby and normal operation;

After analysis, it was decided to use the third standby circuit for improvement. In this form, the degaussing circuit can also be inoperative during standby, which can greatly reduce power consumption. The specific improvement steps are: cut off the power supply to the motherboard's power cord; find the CPU standby pin on the motherboard; remove the original standby triode; cut off the CPU + 5V original power supply, and then pick up the (picture) circuit.
Component requirements: B selects a high-quality genuine transformer with a small heat output and an AC output of about 10V. The relay K1 selects 5V or 12V, 10A. Normally open normally open two contacts (when 12V relay is selected, the voltage at point A is connected to the voltage before voltage regulation), and the normally closed normally open two contacts are used because the CPU has standby output low level and output high level. of. The following is an example of the CPU output high level during standby. Briefly describe how it works.
During standby, the CPU outputs a high level, Vl saturates and conducts, and the relay K1 pulls in. Therefore, when the main board power supply is connected in series with the normally closed contact, the main board loses power and the whole machine stops working. When working, the CPU outputs low level, V1 is cut off, and the whole machine works. When the CPU standby output is low, the working procedure is opposite to the above. At this time, the motherboard power supply should be connected in series to the normally open contact. Because there are few components in this circuit, you can directly lap welding (note the insulation), connect it to the motherboard and switch with wires, and then place it in the machine and fix it.
Of course, the above circuit is also suitable for small and medium screen TVs.
After the above improvements, the author again tested, standby power consumption is less than 1 watt, suitable for long standby.
Furthermore, due to the isolation of the transformer (the practice proves that the transformer is better than the switching power supply), the CPU is in a lightning strike during standby. Also not easy to damage.

This article refers to the address: http:// 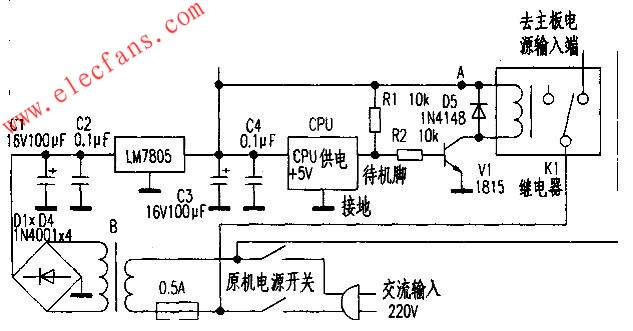 customized Lights in China with resonable price and good quality,we can make moulds by ourselves.We hope to establish cooperative relationship with you.