On the eve of Shanghai Mobile Communications Conference, Qualcomm executives talk about 5G vision, vice president of Qualcomm Technology Engineering Durga Prasad Malladi accept the "ETtoday ETTV cloud" to access the China, Hong Kong, Taiwan part of the media, said the fastest in 2018, will There is a 5G mobile processor released, but for now, he also mentioned that 5G mobile phone development will be challenged by multi-band demand and endurance. 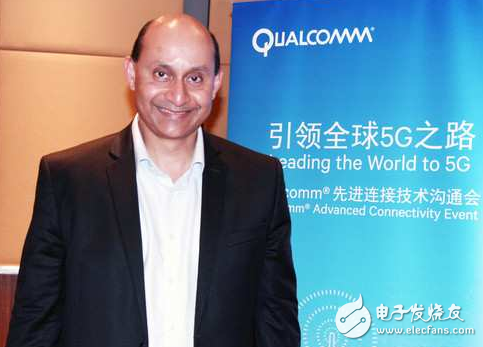 Undoubtedly, with the demand for real-time streaming of Internet of Things, virtual reality, high-definition video and audio (such as live and live viewing), 5G mobile communication has become a major issue for various telecoms, chip manufacturers and OEMs in 2016.

When Durga Prasad Malladi vice president of Qualcomm Technology Engineering earlier accepted "ETtoday ETTV cloud" interview that, in the broad sense IoE (Internet Everything of) vision before, 5G from national wisdom, smart city, smart home, to watch wisdom, Smart phones will be widely used, because it is not only the transmission efficiency improvement, but also the concept of smart internet. In this case, the smart phone will no longer be the core device of the whole network, because: "everything can be networking".

The reporter further inquired that with the existing development technology, the possibility and challenge of developing 5G mobile products, Durga Prasad Malladi put forward two major challenges, one is the "end of life" problem. He believes that in the future 5G era, mobile phone life will be greatly affected, I believe no one will want to charge the phone every half an hour, so to make the phone have ultra-high performance, high efficiency and maintain high endurance, will It will be the biggest challenge.

In addition, Durga Prasad Malladi also believes that among the multi-mode and multi-connection technologies of 5G communication, smart phones must be able to support different frequency bands at the same time. Many network connection technologies must coexist in smart phones. For RF front-end development, there are great difficulties and challenges, but he also stressed that Qualcomm has many solutions in the development of 4G communication technology, so for 5G development, Qualcomm has a considerable technological leadership.

In addition, Durga Prasad Malladi further revealed that the mobile processor line with 5G standards, the fastest will be published by the end of 2018, because of the standardization process 5G, the first edition of Business Ethics will be released in 2018, general In other words, the processor must be released after the specification is released, so Qualcomm will issue a 5G-compliant processor between late 2018 and 2019.

Main characteristics as below:

- LED action display, each action be absolutely clear to see.